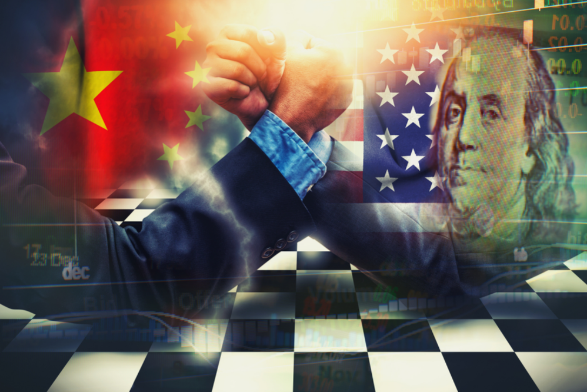 It’s increasingly apparent that no matter what we would like to believe, we are at odds with the People’s Republic of China. Call it what you will, but the United States and China have begun the struggle that may have been obvious to some and is now glaringly obvious to most of us – it’s a cold war. As it’s been said in many ways throughout history, when goods cross borders, guns do not.

U.S. employment is high, consumer confidence is strong, and the U.S. stock market is near all-time highs. Yet, the United States Government Bond market is flashing warning signals. As we write this letter, one-month Treasury bills are yielding 2.30%, while the ten-year U.S. Government note is yielding 2.10%. An inverted yield curve occurs when short-term interest rates are higher than longer term interest rates. This event is generally followed by a recession, although the timing is uncertain. What this means is that markets are waiting for the proverbial shoe to drop.

Japan has reacted to Chinese rhetoric and hostility by announcing a $47 billion defense budget coupled with an order of 150 F-35 fighter jets and the first aircraft carriers since 1945. Prime Minister Abe and his Liberal Democratic Party have sought to revise Article 9 of their Constitution, which outlaws war as a means to settle international disputes. This is a significant departure from Japan’s historical pacifism post World War II.

Western nations have been trying to address their weakened economies through low interest rates.  After the financial crisis of 2008–2009, massive borrowings were undertaken to stimulate their respective economies. In many of these countries, negative interest rates have occurred. This means that when you lend money to the government in order to keep it safe, the government takes a little from you rather than pay you! When this debt cycle ends is anyone’s guess, but right now there is no end in sight.

Some policy makers have advocated a new theory known as, Modern Monetary Theory. It suggests that governments use fiscal policy as opposed to monetary policy in order to solve social issues. Under this scenario, governments adjust spending and tax rates to achieve full employment, thereby, creating new money to fund government purchases. The primary risk to this strategy is inflation, which can be addressed, in part, by raising taxes and issuing bonds to remove money from the system. This theory is very controversial as it has not been tested before.

With uncertainty on so many fronts, the stock market used the month of May to retreat. This is not unusual as the expression “sell in May and go away” is an old adage.

Despite all the political risks at present, there is enormous economic opportunity in technology and science. The planet is adapting to more people, and governments are struggling in the effort to satisfy their citizens’ basic needs. This will not be an easy fix. As populations grow, so do their needs. Can these needs be met using old methods?

As your advisor, one of our roles is to identity change and be out in front of it. Major shifts are occurring in the way we live and function. These changes present great opportunities. We are confident in our ability to steward our friends and clients through these choppy waters and take advantage of the future.

Thank you for your continued confidence.

Have a great summer.