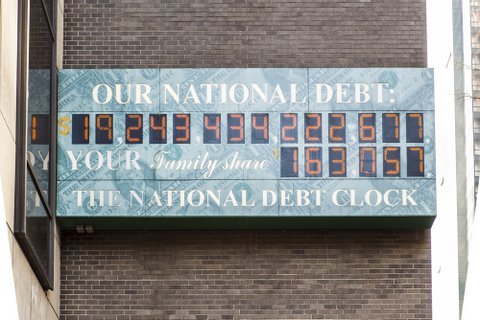 The Dow Jones Industrial Average plowed past 20,000 this week just as the national debt is expected to cross the $20 trillion mark by the end of 2017.  Both of these numbers would have been hard to fathom eight short years ago.

It appears that the bull market in bonds is coming to an end after roughly 35 years.  Over the last three and a half decades, the U.S. has continuously paid lower interest on its debt, thus helping to lower the Federal Government’s required payment schedule.  Yet the U.S. Federal Debt now stands at $19.96 trillion.

The above figure does not include state and local debt, nor does it include U.S. agency debt or unfunded liabilities of entitlement programs like Social Security and Medicare.  Federal debt is roughly $61,175 per person!

All that debt is staggering yet seems to be manageable at current rates of growth in gross domestic product (“GDP”) and the  current levels of interest rates.  It is, however, approximately 104% of GDP, the highest since 1946 when it was 121%.  Therefore, one has to ask “if interest rates rise, will that not accelerate our debt costs to unprecedented levels, and if so, what are the implications for growth rates and the deficit?”

We believe that these may become important questions later in the year and throughout the Trump Presidency.  Thus far, the first days of the Trump Administration have seen stocks reach new levels.

Earnings are coming in mixed, which should keep equity prices bouncing up and down at current heights as long as interest rates remain at these levels.  We do expect moves in interest rates to come at a slow pace, with a 2016 growth rate of 1.6%, the economy is not revving on all engines.  The Federal Reserve must be very deliberate in their actions.  Any sudden and large move higher in interest rates could have a negative effect.

Trump’s promise of tax cuts for American businesses is the potential propellant for higher equity valuations.  The rhetoric coming out of the White House on other issues, however, is a factor which we cannot calculate.  Be prepared for some volatility.

We are a firm believer that when goods cross borders, guns do not.  Isolationism can be very dangerous, and so, we are wary of some of President Trump’s initiatives.  We will see.

As we move into the year at FMC, we are looking to take advantage of our market access by adding additional equity platforms to our internal capabilities.  We will communicate more about this to our clients individually.

Everyone seems to be talking about inflation.  We are seeing anecdotal evidence coming out of Asia in particular with much higher material costs reported by clients.   This will ultimately be reflected in higher prices here when accompanied with tighter labor conditions.  Until now, technology and the great recession have put a damper on inflation; let’s hope that it continues.

Let’s hope we are not dealing with this problem any time soon!